ObDisclaimer: My rants! No one else's! Nyaah!

* 1st Presidential Debate: Rude much, McCain? I have to admit: for a long time I liked McCain, and not because he's one of my state senators. But ever since this whole race started, he just keeps dropping in my estimation. Watching the debate - just the rudeness he displayed to Obama - floored me. Shame! (But, hey, at least there was a debate, and the grandstanding from earlier in the week came to nothing.)

* Bailout Whining: If Pelosi's speech didn't actually change the bill (and, erm, it didn't), then why should what she said affect how folks were going to vote? Regardless of how I feel about the bailout bill itself (which I promise not to get into here), this whining and finger-pointing about "Those almost-votes didn't vote because of what she said, waah, waah" reminds me much too much of my 3-year-old son's schoolroom. Grow up, people!

* "Gotcha" journalism: If you don't want what you said quoted back to you and it shows you up badly, oh, I don't know, check your facts first. Or, gee, don't say it at all. (I laughed and laughed when McCain told Obama "That's not something you say out loud" and then Palin pretty much said exactly what Obama had the next day. Priceless.)

* The upcoming VP debate: Can. Not. Wait. I don't think it's going to change much race-wise, but boy, is it going to be entertaining (one way or the other).
Posted by Ruth at 3:22 PM 0 comments
Labels: politics, rants

Today: T-shirts! All from the folks at Instant Attitudes.

This is a sexy librarian look? 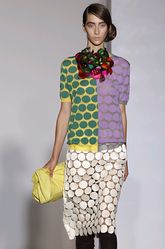 You are looking at a preview of the fall line from designer Marni: "The Italian label offered its take on sexy librarians this season."

My second reaction: More laughing, with a bit of a wince.

Thanks to the.effing.librarian!
Posted by Ruth at 10:31 AM 0 comments
Labels: fashion, humor, librarians

Thanks to Hedgehog Librarian!

ScaryGoRound has a new Tshirt available for order: Dr. Dewey Decimal! Also be sure to check out Books Rule from the same great shop. (thanks, Jeff!)

I love it when fall arrives in the desert; sunny days in the low 90s, clear nights in the low 70s or high 60s. From now until March, this is the weather that makes living here worth the summer heat!
Posted by Ruth at 9:51 AM 1 comments
Labels: humor, tees

Yes, it's another catchup posting!

The Popular Culture Association and American Culture Association Annual Conference will be held April 8-11, 2009, at the New Orleans Marriott in New Orleans, Louisiana. Scholars from numerous disciplines will meet to share their Popular Culture research and interests. Prospective presenters should send a one-page abstract with full contact information by November 30 2008.

Posted by Ruth at 9:45 AM 0 comments
Labels: conferences

Brilliant! Be sure to check out the Fredricksen Library Bookcart Drill Team as they do an awesome quick-change from Marian the Librarian to Queen! (I can't seem to embed this one properly or I'd have done so...go check it out!)
Posted by Ruth at 3:20 PM 1 comments
Labels: bookcarts, fun

Two funnies, and a not-so-funny:
Weather report: Jurassic Librarian isn't far off on his solar system chart; we hit 101°F today, supposed to hit 102° tomorrow. I hear there's this thing called "fall" happening in other parts of the country...
Posted by Ruth at 3:27 PM 2 comments
Labels: humor, image, librarians, weather

Snagged from WarMaiden and HedgehogLibrarian... I've not done one of these "list memes" before but... it's food! The idea is, that this is a list of 100 foods that every omnivore should eat sometime in their life. The idea is to bold the ones you've eaten. Being not only omnivorous but foodiily-adventurous, or so I think, I thought I'd give it a whirl!

So... not too bad, eh? Some of these I had to look up, and for some things like the venison, snake and (hey, it's not on the list!) javelina I have to thank some friends of my folks who retired out in the middle of the desert. Oh, and pigeon pate. That's thanks to them, too.

Rex Libris, Stereotypes, and All That Jazz

Hi, all - I'm back! I've been saving up a few things but rather than stuffing them all into one big posting I'm going to dribble them out over the next couple of days, get back into the regular-post thing :-D

I simply cannot stop singing this catchy tune: Hi-Fi Sci-Fi Library! Michael Porter (Libraryman) and David Lee King have done an amazing job. Check out the lyrics, too, if you miss a few during the video!

Just in case you haven't read about it (or heard it) yet, the group My Morning Jacket's recent album release "Evil Urges" has a song called "Librarian" on it. I think I've already commented on the lyrics.