A Librarian's Worth Around the World 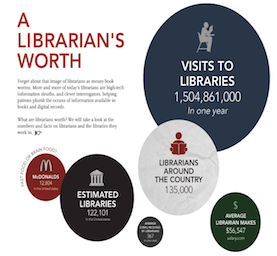 from Ritu Pant via the Internet Librarian LinkedIn group, check out this great infographic on the worth of librarians.  There's a lot of really interesting information in there, even for us librarians! I particularly liked the "One week in the life of a librarian" and it got me thinking about trying to create a similar thing for my own library life. Hmm...
Posted by Ruth at 9:37 AM 0 comments
Labels: librarians, values, worth

...why I haven't been posting as much as I could have (or should have). It's good to be busy, though! (Not so much with the knee thing.)
As of today, I'm teleworking full time and fairly restricted mobility-wise; I see a surgeon next week who hopefully can fix things up a bit. My plan for the rest of the year blog-wise is to get back on the horse with regular postings as soon as I can! Thanks for sticking around.
Posted by Ruth at 2:29 PM 0 comments
Labels: randommusings
Newer Posts Older Posts Home
Subscribe to: Posts (Atom)