A look back at NLS6


I can hardly believe it's been two months already since I adventured to Australia to participate in the Sixth New Librarians' Symposium. It seems like just last week I was discovering how beautiful Brisbane is, how immensely cheerful the NLS6 chairs Kate Davis and Vanessa Warren are (and incredibly graceful under pressure!), and what a fantastic endeavor this symposium was.

My family and I arrived several days early (come on, I can't go to Australia alone!) and overcame our jet lag on the sunny shores of the Gold Coast. Upon heading into the city proper, we were bedazzled by just how pretty it is - even a week after a cyclone came through (!!) - and astonished at the hills. I think my legs have only just stopped aching! We explored the botanical gardens, bridges, and South Bank, and ended up at QUT to pick up my registration pack. Even then, the first day of the chaos, Kate and Vanessa impressed the hell outta me. (Note, I didn't attend any of the workshops on this first day.)

The second day - that is, Sunday, February 10th, exactly two months ago today - was a really big one for me, as I was presenting the closing keynote session that day. To say I was nervous might be a small understatement. Watching Ingrid Parent (IFLA President) give the opening keynote, and Marcus Foth give the afternoon one (informatics r fun!), didn't lessen my jitters any - they're impressive speakers who shared some impressive ideas.

During the morning sessions, I attended the audacious "Being Seen and Heard: A workshop across two conferences" that Molly Tebo and Kathryn Greenhill were doing - interviewing people at the symposium for questions, then carrying it onward to the ALIA Information Online conference the week after for answers. They're going to pull it all together into a reference for new librarians. Very cool!  I also sat in on a session titled "The Embedded Librarian: is this your future?" by Jennifer Osborn - it was interesting in an academic sense for me, as I'm living that life already, but good to see that the concept is getting out there and discussed. I then bounced between a few sessions, on embracing change, having confidence, maintaining balance, and social media.

In the afternoon, I missed out on what sounded like some great sessions on the twitterstreams, due to last-minute tweaking and pecking and fiddling with my presentation. I'm very pleased to say it went well - the room was packed, the energy was great, and the twitterstream was full of wonderful things. My goal was to tell the group something they didn't already know, and I'm pretty sure I nailed it! I'm delighted that I also got one of the symposium sketchnotes, by the amazing Kim Williams: 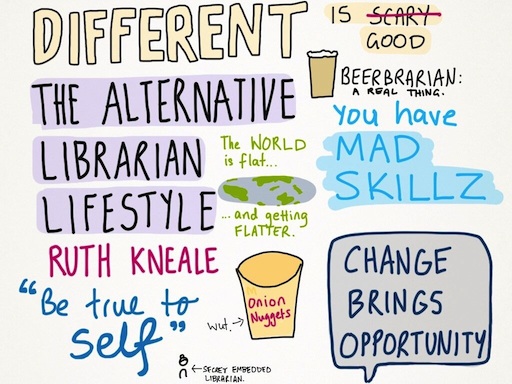 Day 3, the second full day of the conference, I was able to relax and enjoy both the keynotes and the sessions. Sue Gardner gave a great opening keynote about librarians, Wikipedia contributors, and changing information - big info shared in a very engaging way.  Sessions on dynamic librarianship and "the rise of the hipster librarian" were fun. Ryan Donahue of the Met talked about information systems and information management behind the scenes at one of the world's largest museums; he made me want to jump specialties for a while there! Holger Aman and Michael Carney gave a really illustrative comparison session - they're both young male librarians who literally work across the street from each other, in very traditional institutions - Holger works at the Law Courts Library, and Michael works at the State Library of NSW. It was fascinating!

After lunch, futurist Stuart Candy talked about the future of libraries - and why it's so damn hard to predict it. Talk about making big ideas accessible - he did a great job, talking about the Long Now, how many outcomes there are in the cone of possibility, and how sometimes a prediction really is just a WAG*. There was a panel session in the afternoon that I got a real kick out of: "Librarians we love" were asked by the moderator to bring one item that has real significance to them, and tell the audience about it. What a great way to learn something about others in the profession, especially leaders! So often newcomers aren't sure if they can just go say hi to someone "more established" - this panel broke right through that hesitation. It was great!

The closing keynote for the symposium was by the always-amazing Jenica Rogers, who I finally got to meet face-to-face. (Squee!) She talked about the need for more wild thinking - not self-defeating ideas, but big audacious grand ones. We need heroes in libraryland - she's one of them, given the ACS thing (which she did talk about). We need change. We need more activism! She had a rousing call to action to all the new librarians in attendance; time will tell how that plays out. (I have high hopes!)

Overall, I was very impressed with the symposium - especially considering it was put together by an all-volunteer group spread out over the entirety of the (truly gigantic) country. No tech snafus, no scheduling hiccups, food and drink appeared when it was supposed to, and every person wearing a Staff t-shirt was welcoming, open and helpful. It really was a model to me of what a small conference can be like. Congratulations again to Kate and Vanessa and their team for a great experience, and thanks to the State Library of Queensland and the Queensland Government for their support in bringing me to NLS6.