"I believe in libraries and librarians." I totally agree with what Christina said, but she says it much better than I could. Bonus: she's now a blogger for ScienceBlogs - congratulations, Christina!
Posted by Ruth at 9:29 AM 1 comments
Labels: librarians, libraries

These have been collecting for the last couple of weeks; more to come later!

* thanks to Danny for letting me know about "Sit Down, Shut Up", a short-lived animated TV series featuring an "unappreciated librarian who often gets mistaken for objects such as brooms or toilet brushes." Makes me want to run right out and see it... er.... wait....

* librarygrrrl has written several Reference Desk Haikus that just need to be enjoyed. My favorite is "I am an expert / in tracking down resources. / I earned a degree."

* See! I told you not to mess with a Warhammer 40K Librarian! 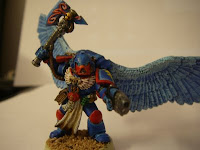 Currently 93° and sunny. Looks like we might have an early monsoon season this year!
Posted by Ruth at 4:26 PM 0 comments
Labels: fun, librarians

Volume Two of the collected Rex Libris, "Book of Monsters," is now available! Get your copy from SLG Publishing today, or ask your local comic book store to order you one! If you weren't able to get the individual issues, this is the best way to see what you've missed, and based on the extras added to Volume One, "I, Librarian," there will be lots of fun extras in this one too.
Posted by Ruth at 3:48 PM 0 comments
Labels: comics, fun, librarians

(So much for scheduling; this was supposed to go up yesterday. The sentiment remains the same.)

Today is Memorial Day. It has become a day of BBQ by the pool, a day off from work, but the real meaning of the day is to honor and remember those who have died in military service, and that was brought home to me when the Missing Man jet formation flew over my house at 9am. Many of us also use it to honor those who are currently serving.

I wanted to honor the memories of my grandfathers, who both served in the early days of the Air Force in WWII. I also want to honor the men and women I attended AFROTC Det 020 with in the mid-80s, especially the ones from Bravo Flight Fall '88. Those "kids" - who were frenshmen and sophomores then - have now put in almost 20 years with the Air Force and I think of them often. Those years in Det 020 shaped me in ways I'm still coming to understand, and I believe all the lieutenants who come out of 020 - whatever year it was - have a core connection that ties us all together.

I specifically want to mention Karl and Kevin, serving in different branches now, who work their butts off to make sure the soldiers going into action have what they need, and James, whose awesome helicopter skills helped ensure their safety once they arrived.

Lastly but, in my opinion, most importantly, I wish to honor my father, John. He signed up with the Air Force the day he turned 18 and served with distinction for a quarter of a century. Because of the life he and my mother chose to live, my brother and I were exposed to cultures and ways of live that many Americans these days are not, and I am thankful every single day for that. I learned many valuable lessons from my father over the years; one that I have tried to incorporate into my daily life is something he told me when I was on summer break from college, and home working at the Air Force base for the summer. I had to deal with a particularly rude and belligerent officer that day, and that night my father told me: "When you become an officer, don't assume you know everything, because you won't. Having bars does not deliver omnipotence. Learn from the non-coms under you, because they're the ones who do know everything. If you can learn from them and lead them with respect, you'll be a better officer for it." It took a while, but I eventually learned that this lesson applies to every aspect of life.

I had every expectation of following in my father's and grandfathers' footsteps, into a military life. Sadly, the Gods of Knee Injuries had different plans for me and I was discharged between my junior and senior years; however, growing up in the military life and what I learned from my father and the instructors at Det 020 have helped shape me into the woman I am today.

Thank you, Dad, Grandpa, and Opa, and thanks and blessings to every single man and woman who serve or have served in our Armed Forces.
Posted by Ruth at 8:51 AM 0 comments
Labels: honor, military, militarybrats

So, a friend of mine (hi Jeff!) asked me if I'd heard "I Love My Library" from Lunch Money's new album "Dizzy". I had not, so I trundled off to their web site and gave it a listen. This is great stuff! NPR thought so, too.

Snippets of the lyrics have stuck with me (as a big Nancy Drew fan when I was a kid, that line especially) but my favorite has to be this one: "All the places I could ever wander to…I have a ticket for free…and guess who tossed me the keys?"

Go forth and check them out! Then eat a cookie as big as your head.
Posted by Ruth at 10:45 AM 0 comments
Labels: libraries, music
Newer Posts Older Posts Home
Subscribe to: Posts (Atom)